Fresh Water Supply from the Ancients to the Moderns

Pipes on the exterior of a building built around 1930 in Jerusalem.

As far as fresh water is concerned, there have been advancements in terms of pipe sizes, and tanks being put onto the top of skyscrapers. As many buildings have solid cement walls, water pipes are placed on the outside in temperate climates and on the inside in colder climates. Modern residential buildings have plumbing in the interior wood framed walls as much as possible.

As piping materials progressed over the ages from clay in Mesopotamia from around 3000 BC. Copper and brass materials were found in Egypt and utilized around 2500 BC. The Romans used lead, as we have seen in the pipes leading to the Bath site in England. Today, water is heated in tanks, either powered by gas, oil, electricity directly, or off of a furnace as a separate zone. 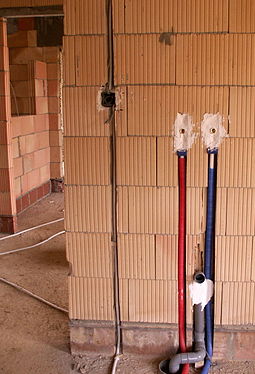 Both hot water and cold water plastic piping for fresh water and plastic for a drain.

Polyvinyl chloride (PVC) had been developed on an experimental level, but not used commercially until BF Goodrich developed the plasticization of PVC, which was used in waste drainage. Further development occurred in the development of clean water transmittal with the development of acrylonitrile butadiene styrene (ABS) in the 1950’s in Western Europe and in Japan. Also developed during the 1950’s was cross linked polyethelene (PEX). The PEX comprises the modern day clean water piping material, complete with fittings and the appropriate glues for connecting them.