Progressive Development in 18 Century England into the 21st Century America

Civilization was on the way back with the progressive reinvention of the toilet. The flushing toilet actually was developed in China and the first known one was found in a king’s tomb by archeologists which existed in the Han province during the Western Han Dynasty, 206 BC – 24 AD. However, in Britain, several versions of the flushing toilet appeared and were refined upon. The first British flush toilet was invented by J. F. Brondel in 1798.

As science began to seriously develop in Europe and people became more sophisticated to diseases, it became apparent that good clean water, separate from raw sewage, had to be accomplished, not only for olfactory reasons, but for the progress of civilization living in close proximity, such as London. In the mid 1800’s, all of the sewers from London’s three million inhabitants flowed directly into the Thames river. Drinking water came from public pumps, serving hundreds of people and were open sporadically. Water was collected in jugs or pots to be carried home. Only the finer homes had any piping going to only the first floor and some of the homes had copper or tin lined bath tubs. Water was heated in a fireplace in large kettles for bathing. In 1885, a one-piece flush toilet was built by Thomas Twyford utilizing the design of a flush-out by J. G. Jennings. Over the next 30 years, up until 1927, there were several major advancements to the flush toilet, which included American inventions as well. 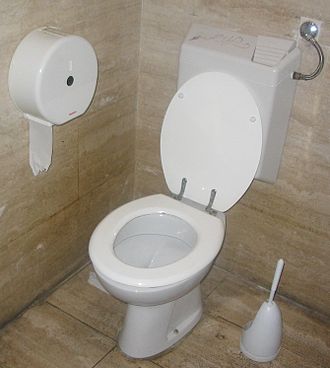 One significant advancement that has particular commercial applications is the tankless high-pressure (flushometer) valve toilet, which can be applied to stand up and sit down models. Though this was invented in 1906 by William Sloan, it is still in widespread use today. As this system has no tank, it has no recharge time. Some models are mechanical and more recently, some models are electronic. The more familiar model toilet, pictured, utilizes the technology that has developed over the past 2,000 years, leaving the less successful inventions in the history books.